Burrard Dry Dock opened in 1906 and was, for most of the twentieth century, the largest shipyard in Western Canada. Over 450 ships were launched from this site including innovative self – dumping log barges, coastal ferries, icebreakers and most famously the WW II Victory ships. The war years were a busy time with around the clock production and a greatly expanded work force, which for the first time included women! Shipyard Pals Sal and Sam will perform stories of this exciting time while walking visitors through North Vancouver’s historic Burrard Dry Dock. 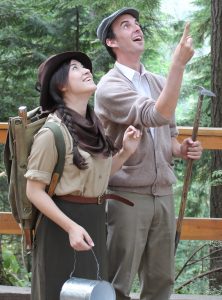 New to this year’s program is a walk in the old forest in Lynn Canyon Park. Here mountaineering enthusiasts Max and Molly will entertain with tales of daring adventure and rescue in the early days of North Shore mountaineering. Named after Royal British Engineer and North Vancouver resident John Linn, Lynn Canyon Park has welcomed and wowed visitors for over a hundred years. On this walk the audience will be introduced to some of the North Shore’s most adventurous residents – mountaineers, rescue team members, skiers and climbers.

Portraying Sal, Sam, Molly and Max are theatre students Kelsey Ranshaw from the University of British Columbia and Julien Galipeau from Langara Studio 58.

How to Participate
Shipyards: Free Drop-in Walks:
From July 2 to August 27, 2017   Saturdays & Sundays at 11am and 1:30pm
Meet Shipyard Sal and Sam for near the foot of Lonsdale at Victory Ship Way, in The Shipyards.

Lynn Valley: Free Drop-in Walks:
From July 6 to August 24, 2017   Wednesdays & Thursdays at 11am and 1:30pm
Meet across from the Lynn Canyon Café, Lynn Canyon Park.